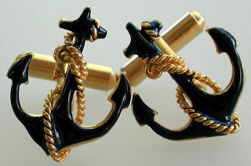 The selection of the correct anchor or anchors for a particular boat depends on several factors - the load that the boat may place on the anchor - and the seabed. The load will also depend on external conditions such as the force of the wind on the hull above the waterline, the currents below the waterline and wake action at any give time.

The holding power of an anchor also depends on the type of bottom. An anchor that develops a 1000kg of holding power in hard sand may only be able to hold 500kg in a soft bottom. You cannot always tell in advance, where you might anchor ship, so you must have ground tackle for the most difficult anchoring you may be faced with. The horizontal force caused by a particular boat will determine anchor rode. To be effective, the rode must be long and strong enough. The length of the rode must also be so that the pull on the anchor will be horizontal. A scope of at least 7 : 1 - seven times as long as the vertical distance at high tide from the boat to the bottom. This is considered reasonably safe. For example: If you are anchoring in 5m of water, you should pay out seven times the total of 5m, or 35m of anchor rode. Any scope of less than 5m would be considered unsafe in anything but very calm weather.

A short chain between the end of the rope cable and the anchor shackle is effective in reducing shock as the chain tends to lie on the bottom, thus adding weight to the cable and maintaining the important horizontal pull. All components of the anchoring system should be joined with good quality galvanised shackles and the line should have an eye with a thimble where i

When anchoring consider these important points: 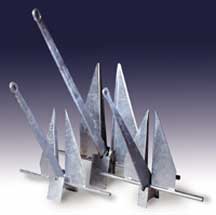